Growing Up Danish (Kind of…)

I had to laugh when I logged into Facebook yesterday & saw a link from Solvang, CA’s page; National Geographic mentioned Solvang on a blog post that the town is one of the “Best European Villages in America”.  When I am asked where I am from, or if  I mention that I re-located down here from ‘up north’ & people want to know whereabouts, often I say, “Santa Barbara Area”….that is code talk for, yep–Solvang! While truth is I WAS indeed born in Los Angeles, I spent about 12 years in & around The Santa Ynez Valley, which is about 50 miles north of Santa Barbara, & the valley consists of Santa Ynez, Solvang, Buellton, Los Olivos & itty bitty Ballard (yes, smaller than Solvang!).  As the article mentioned, Solv IS indeed unique in that it truly was founded by a group of danes who wanted to settle in America; they took the boat over here in 1911 & discovered the land, which already had a strong presence of the Chumash tribe in nearby Santa Ynez as well as a mission in Solv built by the indians & Fr. Serra. The danes soon made the town their home & little by little, the necessities for a city were started up: A general store, college, church, etc.

It was soon after WW2 that Solvang (that means ‘Sunnyfields’–don’t you feel smart now?!) caught on as the tourist destination it is continually famous for when The Saturday Evening Post ran an article about the village & its residents being from Denmark. Soon after this is when more bakeries & shops popped up. Most bakeries were built with the townsfolk in mind, & are there today, ran by 2rd & 3rd generation bakers. You also can step into fancy gift shops, toy stores, a knife shop, boutiques, book shop, coffeehouses (or, Kaffe Hus) as well as the to-be-expected T-shirt & souvenir shops.
One of their greatest sources for entertainment happens every summer when their outdoor festival theatre opens up. This is something very dear to my heart as I spent 4 seasons working at Solvang Theatrefest; sometimes, as a volunteer & also as a Box Office Representative. In 2005, I had absolutely really had it living in such a small area, but there was no sign of my able to do anything different happening in the near future. So, at my Mother’s recommendation, she told me I should find somewhere to at-least volunteer to get out of the house more & sure enough, she found out about the theatre gig for me! “Gee, just what I want to do, go work there & watch some musical about a crap game with gangsters?!” is what I told her. But, being as board as I was, I went, & I ushered for Guys & Dolls on opening night….& returned every single night there was a show for the entire summer! Mother Knows Best, right?! Prior to that, I really was not a theatre person, which might be hard to believe if you are someone who knows me, even a little bit.
The productions are put on by PCPA, a professional theatre company out of Santa Maria (half hour north of Solv); in the early 1970’s, the outdoor venue in Solv was built with the plan in mind to bring plays & musicals to Solvang’s gorgeous summer nights (But yes, it can get cold!) & I have seen some of my most favorite shows there. Along with Guys & Dolls, Importance of Being Earnest, Oliver, Beauty & The Beast, Company & The Real Thing are some of my other favorites they have done.

In recent years, the valley has caught on for its excellent source for WINE! Friends have teased me that I must have drank alot while living there, but the truth is….hardly at all. I really have only began drinking more since I moved to S. CA. Mainly, because I have more friends to socialize & have a fun time with. All throughout the area, even more north like San Luis Obispo & Paso Robles (little over an hour away), you will find many vineyards, most commonly growing reds, like Syrah & Pinots & some whites, like Pinot Grie. Wine tasting rooms have shown up all over Solvang, & has really helped the economy for the area, as well as the publicity we got when Alexander Payne (most recently directed The descendants) directed Sideways there, based on the hilarious novel about 2 men taking a trip to wine taste & have a final bachelor weekend before one gets married. While it was such fun to see parts of your own little town in a film, I must say, I loved the book alot more. Sitting in your room reading a best-selling book that has paragraphs like, “As we left Paula’s Pancake House & drove up Alamo Pintado…”, & knowing that cafe & road are literally 2 blocks from your house, was very surreal to me. While Alexander Payne, Sandra Oh & Virginia Madson lighted the town christmas tree that year in 2003, Paul Giamatti was not there, as I have been asked;-)

I have alot of friends who miss their hometown, & sometimes it makes me feel strange because, well…I really do not miss Solvang. Sometimes, I look back at happy times & think I did not realize just how good things were for me back then; even little, quiet moments, like writing every night in my journal, or reading a book in my bedroom at all hours. I was very isolated, & kept myself busy by long walks & thrift store shopping to find books or crazy clothes to make my own style (like my long, plaid Scottish skirt I wore with combat boots & a sweater with a huge safety-pin through it….yes, I am cringing, too). Nowadays, I do not read as much as I used to, don’t keep a journal (but hey, a blog isn’t a bad way to re-start journaling!), write letters religiously or frequent thrift stores. I have grown up & changed, I hope for the better, but, if I could go back & talk to me at, say, 17 or 18, I would tell my younger self to enjoy being in a boring, rural area…& that yes, more concerts would be in my future! 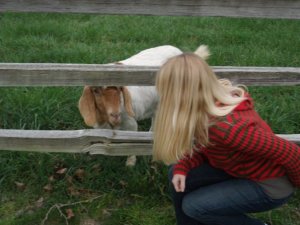