A Day at The Races (38th Annual Toyota Grand Prix of Long Beach!)

2009 marked real changes in my life; the biggest being I moved out of my parents from Solvang, CA, down to sunny SoCal in the Fall. But, prior to that, in Spring of that year, I was down here visiting my Grandma & attended my very first Grand Prix event since it just so happened my favorite actor, Adrien Brody, would be a racer in the Pro-Celebrity Race! I am sure most people think he is my favorite just because I think he is so striking & handsome. Don’t get me wrong, I have a huge crush on him (haha!) but, I DO truly love his work as an actor & feel he is very under-rated, yet I believe that is more by choice, which I think is also really cool of him; he acts for acting, not all for the glitz & glam. While I have gotten to meet him in 2009 as well as 2010, I also had QT with him this past weekend while he raced for his 3rd time, on his birthday, no less. Sadly, he has yet to win but kudos for him that he keeps returning (probably since he knows his fans like myself love to see him!).

The Long Beach Grand Prix is one of the most exciting events the Southland has to offer, in my opinion. So much of Downtown Long Beach (which rivals many parts of NYC to me in such a little space; the skyscrapers, the diverse areas such as The East Village & Retro Row, the hustle & bustle, array of people) is closed off to literally be the race tracks for the Indy Racing League, & now even Le Mans. It is the biggest street car race in North America, & was the brainchild of Mr. Christopher Pook, a racing fan turned travel agent, who 1st had the Toyota GP of Long Beach vision in the 70s.
Since the beginning, the Pro-Celebrity Race has been a Saturday staple, besides Adrien, other past celebs include: Keanu Reeves, George Lucas, Mad Men’s John Hamm, Patrick Dempsey, Long Beach native Cameron Diaz & Queen Latifah. Forget going to Hollywood people, just come to Long Beach in April!;)

Every past year I have been, the weather has been like summertime, very warm & not too comfortable (Coppertone SPF always has made me recall the race). This year, on the kick off Friday (the 13th, no less), there was lightening, thunder & hail. But Mother Nature did not let us down for the remaining 2 days, it was absolutely perfect weather to be out & about for a day at the races!

This year was easily my most amazing yet; it showed me just how important random acts of kindness are. I was waiting outside the entrance/exit of the celebrity lounge after the race, hoping to grab Adrien for a photo as I did 3 years ago (Gosh, its been that long already!) & a woman came up to me, saying, “Do you want to go in?” holding up a wristband. Her name was Anne & it seemed she had to get going, she said she could tell I was waiting for people to come out, so she recommended I just go in & have fun, as she tried to help me tug on the band over my hand. I was shaking I was in such disbelief! I got in, & got another photo of me with Adrien. I hope I can randomly make someone as happy as Anne made me one day soon!

(*All photography copyrighted & taken by Along Comes Mary. Please contact her for permission BEFORE using in your own media. Thank you) 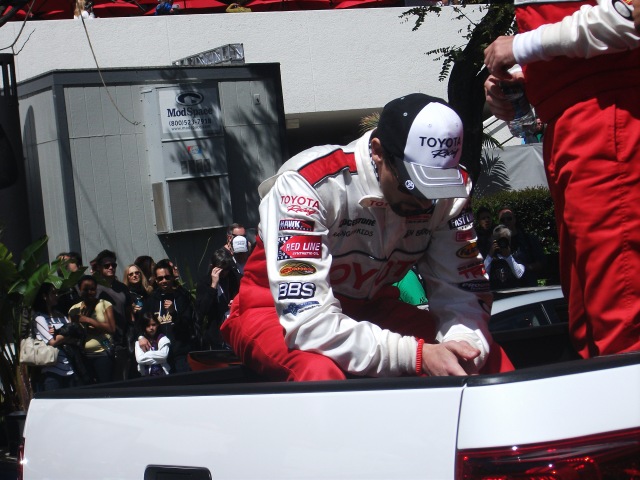