Are you a movie fan? Me too 😉 Do you like museums? If you follow me pretty regularly, you probably know that I am a huge fan of The Los Angeles Museum of Art. I go whenever I can (although I have yet to make it to a Sunday concert!) & last time when I was there for The Young Director’s Night, I had the treat of seeing one of their visiting exhibits, Stanley Kubrick. I admit, I did not know much about his work prior to this visit, yet what I found myself most impressed with was his photography. Before he was one of the greatest film makers ever, Kubrick got his start in photography, following the death of FDR, a young Stanley snapped a devastating shot of a local newspaper stand seller holding up word that FDR has passed away. From there, Life Magazine nabbed Kubrick to be a contributing photographer, earning a whopping $16 a photo. 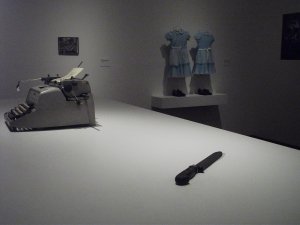 The memorabilia from The Shining is a must-see, especially the typewriter, knife & costumes that those creepy twin girls wore! Something else I learned about the film maker was that he was working on A.I: Artificial Intelligence at the time of his passing, that is an awesome film that I thought was completely the brainchild of Steven Speilberg. I also learned that Kubrick did Lolita, which is an amazing film based from one of my favorite books.

You can also see his very own scribbles on script pages, as well as one of his cameras (which I thought was super cool!). The movie posters were great to peek at, too, especially 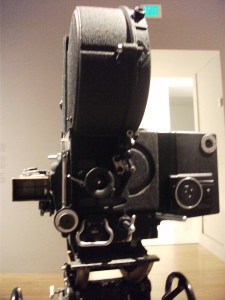 for a newbie like myself. When you first enter, you’re in a dark room with films playing on the screen, setting the mood for a rather eerie museum visit…

And, of course, there’s plenty to see for his classic, The Clockwork Orange! While I have yet to see this masterpiece (I may be…a little….afraid….just a little!), seeing actual props from it has shown me I must put on my big girl pants & watch it soon 😉 I have seen & loved Eyes Wide Shut, his last full film to complete. You can observe some of the making of the film at LACMA, too.

Whether you’re a fan of Kubrick yet or not, this is a great exhibit to see for any film buff, museum go-er or visitor to LA & The Miracle Mile. It will be at LACMA through June 30th, & you can get further info here. They have also done some film screenings, so keep a look
out for one of ’em! 🙂 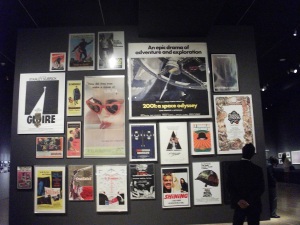 5 Responses to Stanley Kubrick at LACMA