Family: What does that mean to you? #DeliveryManMovie Trailer Premiere…

“Everyone has a purpose in life. I guess I just haven’t found mine yet.” Says Delivery Man, David. Hes in a dead end job & living a life he hasn’t really found the meaning of…until he discovers that a mishap with donating his sperm for ONE procedure years ago turned out to make him the Father of 533 kids! 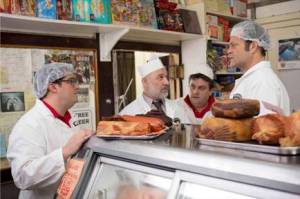 Wanting to find each of these children & see where their path has led them, he ends up finding….you guessed it…himself. He finally begins to feel he is apart of something & has a family.

This new Disney film starring Vince Vaughn has made me think some about that word, Family. What does it mean to you? Can you create your family? Or is it those sometimes nut cases you were born into? For me, especially with a new chapter beginning this week for me (moving to Pasadena, from Long Beach, where I’ve been for almost 4 years.), I’ve been thinking about the people I feel have become somewhat of my own strange, unique term of the word.

When I was a newbie here in 2010, I answered a Craigslist ad to do social media with a film maker, Linda Palmer. Since our first phone chat, she has become one of those great friends I can spend a lot of time working on a project with, then we may get busy & lose touch a bit, but then, something amazing I want to be apart of pops back up. Playing a Stripper Ho & working as a PA for her debut film, Halloween Party, introduced me to such a great group of people. While I have not seen each & every one of them much since the film wrapped, we filmed a music video last week for the movie’s soundtrack & a good handful of those awesome artists were there. That felt like a family; catching up, having fun…like a reunion. I always love to see this bunch.

Then, another great adopted family of mine since coming to SoCal is….the Blogsphere! What a wonderful world I was introduced to last year. I do not go a day without checking in on The SoCal Lady Bloggers, & have my must-not-miss blogs. Here again, I may not see these wonderful women (& some men!) as much as I would love to, but, I know they’re there. I already know I will get to see more of some of them as quite afew are in Pasadena…some people have that cousin they give a call to when they’re in town, for me, I know what blogger buddies I want to hit up when I am in the neighborhood 😉

Delivery Man hits theatres everywhere November 22nd, & is rated PG-13.  I am beyond honored to say that I am one of 533 bloggers (get it?!) debuting this new, official trailer on my blog. I hope you will join me in supporting this film & walk the talk of discovering just what FAMILY means to you! 🙂 xo

1 Response to Family: What does that mean to you? #DeliveryManMovie Trailer Premiere…