It has been brought to my attention from Disney Pictures that this Sunday, August 4th, is Sisters Day! While I do not have any biological sisters (I am an only child), I thought what better a time to tell you about my nearly life long friendships I have had with my pen pals from around the world. 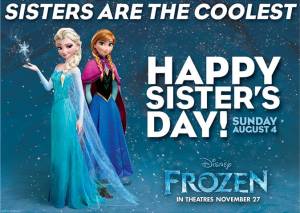 So, when I was 10 years old, my Grandma joined me into The Suzy’s Zoo Fan Club. You know Suzy’s Zoo, right? The adorable stationery company?! Well, with your membership, you got an awesome quarterly magazine with special discounted prices on their products (I was The Sticker Queen, as both my Grandma’s called me) as well sections where you could meet the members aaannd, write to them! 😉 They would list members who wanted pen pals. I quickly jumped on that band wagon & had many

While I have not kept in-touch with my very first pen pal, I still do know many, & count them among some of my dearest friends. When the Suzy’s Zoo Club stopped printing their magazine (Boo), a bunch of us moved on to something else to keep the faraway friends going strong….we were the pioneers of Facebook, you could say, with FBs…aka….Friendship Books. Looking back, this was a little shady for a bunch of young girls to be sending around to God knows who (lol), but Fbs would entail listing our name, address, age & interests. I do recall one or two weird letters (I don’t think my parents knew though haha!) but I went on to meet more great girls that I still am in very close touch with today.

I have had some of my greatest adventures with them, too. In 2009, I finally met Heather from Seattle (above) when she came to visit, followed by Ariel (above….with a bewitching Minnie Mouse….we all seem to meet Minnie 😉 ), whom I affectionately call my ‘Sister in Spirit’ & she says ‘Sister Lady’ for me, we met at Downtown Disney in November 2009, followed by another visit to stay with me in 2010 for my birthday & a Halloween in Hollywood, then I flew up to her great city of Chico, California (below….we’re at their Yo Yo Museum!), for her birthday water park party in 2011 (& am still planning a return trip). October, 2011, found me embarking on one of the coolest ways to get to New York; my pen pal since 2004, Roxane in Luxembourg, came to NYC to work for The United Nations & invited me over 😉

In January, 2012, Miss Southern Belle, Lauralee (above, center), from Tennessee, was in SoCal & I had such a great lunch with her & one her friend, Madeline, from college (Le & I even share the same birthday!). And, last summer had me hosting Holly from England (below), a trip we’ve talked about for around 10 years, one of the cutest people EVER. We had a blast for a week as we went to the aquarium, Sunset Strip, Battle of the Bands for Warped Tour, the beach, Target, Yogurtland & she got to meet some of my friends. It still is a top goal for me to finally get to Bloody Old England & see her over there.

In just about 2 weeks, I will at last meet Julia. Julia is one of those friends you easily have in your ‘real’ life during high school. Not only would we write each other massive long letters (I always remember one she stopped & started, by the time I received it, it was about 30 pages long), but there were times we would email afew times a day & when it was morning for her, she would call me late in the night to talk. We shared all our boy drama, & sometimes it was eerie how similar our stories were, with boys & even them having same birthdays. I have waited since 2002(!) to meet her, & I cannot wait to report back how awesome our meeting in San Diego goes 🙂

So, whomever you consider a sister in your life, whether she be by blood or just connection, celebrate her good this coming Sunday! xo

1 Response to Celebrating Sisters Day with my Pen Pals! #DisneyFrozen