Delivery Man is the Perfect Comedy for A Date Night… #DeliveryManMovie

(*Disclosure: I was invited to an advance screening of this film from Disney/DreamWorks.)

New Yorker meat truck driver, David Wozniak, really isn’t a bad guy. Despite having no career aspirations except delivering pork for his Fathers business, needing a loan for a weed business he is secretly growing in his apartment & dealing with a pregnant girlfriend who may or may not want him in their baby’s life, he really is a great guy at heart, who is just looking for some comfort from his family.

But, what if he has many more next of kin than he thought? In Dreamworks’ new comedy, Delivery Man, Vince Vaughn plays David & soon embarks on a journey after being told he is being slapped with a lawsuit of about 150 kids out of 533 that are his biological children, a massive mishap occurring back when he donated sperm under the name of ‘Starbuck’, wanting to know just who their Dad is. 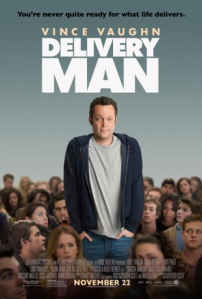 Parks & Recreation star, Chris Pratt, plays David’s sidekick best buddy with an expired license in Law, who attempts to represent him on this, to some very humorous hijinks, & even accidentally making the world think he & David are lovers, love the quip that his Mother wasn’t surprised & his kids think its cool!
When he is given a manila envelope containing the profiles of some of these children, David begins searching them out & becomes their ‘Guardian Angel’ as he goes to see one son win a major league basketball game, cover a coffee shop shift for another as he goes on an audition for the role of a lifetime & save one of his daughters from a drug overdose.

Davids cover may soon be blown by one of his very own. When young Viggo discovers just who this man rather stalking kids truly is, he wants answers. When news does hit the press about a guy known as Starbuck is out there & David learns that Emma (How I Met Your Mother’s Cobie Smulders), his expecting girlfriend, thinks all the allegations & news is all disgusting, he panics….can’t he keep his girlfriend, baby….& the 533 children?

Based on the 2011 film, Starbuck, also by Director, Ken Scott, Delivery Man is indeed a bit far-fetched yet has many poignant, sweet moments showing us that not everyone is how they seem & may have a heart…when we learn just why David wanted to earn so much money & resulted to sperm donating, it’s a real tear-jerker. A shining co-star in the film for me is Sebastian Rene, who plays the disabled Ryan. David has such a difficult time approaching such a severely handicapped person, but steps up to the plate to get to know this son as best as he can.

With a score by the awesome Jon Brion, you will not only be treated to some great music, but gorgeous shots of Manhattan, I was pleasantly surprised to learn that it was not filmed in Canada but set in New York. Rivington Street is the real deal! 😉

(*Disclosure: I am invited often to Disney’s advanced screenings. All opinions are my own.)